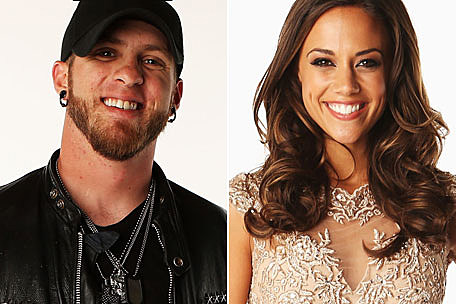 Congrats to Brantley Gilbert and Jana Kramer on their engagement!

According to People magazine, Brantley rented out Nashville's Ryman Auditorium Sunday (Jan. 20) for the entire day -- which just so happened to be his 28th birthday -- and popped the question there. Known as "The Mother Church of Country Music," the Ryman was home to the Grand Ole Opry from 1943-1974, hosting the most legendary performers in country music.

"I was so surprised!" Jana told People. "He asked my mom for permission before he proposed, which meant a lot to me."

This will be the "Whiskey" singer's second marriage. She divorced "That Thing You Do" actor Johnathon Schaech in 2010 after one month of marriage.

Earlier this month, the "More Than Miles" singer and his new fiancée revealed that they are sharing a home in Nashville, with Jana joking that since she is technically the owner, Brantley "is paying his little monthly rent." Odds are, she'll knock a few bucks off now.

"We could not be happier!" the couple told People. "We are so excited to share this special time with our loved ones and cannot wait to start the rest of our lives together."

Filed Under: Brantley Gilbert, Jana kramer
Categories: Country News
Comments
Leave A Comment
Back To Top
Jon Pardi Might Come Out of the Pandemic With a New Skill or Two