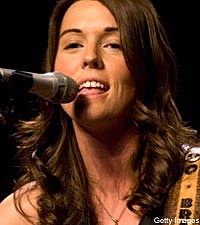 On any given night in Nashville, it's not exactly a challenge to track down quality musical entertainment, but one would certainly be hard-pressed to find a more eclectic -- and exciting -- lineup than those at Music City Roots. And on Wednesday, June 16, a standing- (and sweating-)room-only crowd witnessed, and participated in, the most enthusiastically received performance in the weekly show's history thus far.

The Loveless Barn, adjacent to the iconic Loveless Café (home of arguably the best fried chicken and buttermilk biscuits in town), was already buzzing from the turbo-charged band Mountain Heart, who kicked off the night presenting a unique brand of soulful rockin' bluegrass and closed their skillful set with a frenetic version of the Allman Brothers Band blues classic, 'Whipping Post.'

The sultry pre-summer heat deterred few from sticking it out through the three-hour program hosted by Jim Lauderdale, which also gave fans a chance of seeing (instead of just hearing) WSM and Grand Ole Opry announcer Eddie Stubbs, in addition to journalist and associate producer Craig Havighurst who conducted interviews with the night's musical guests. One on those guests, who faced the unenviable task of following Mountain Heart, was Ryan Cook, a folksy newcomer from Nova Scotia, who appeared as part of the weekly Roots Emerging Artist Showcase. He was followed by singer-songwriter Randall Bramlett, and both rose to the challenge of warming up an audience filled with fans who obviously knew the next performer (and the one they'd clearly come to see) would be taking the stage soon.

The venue exploded with boisterous cheers as young singer-songwriter Brandi Carlile took the stage. A spontaneous standing ovation greeted her before she played or sang a note, and her ardent fans swayed and sang along as the native of Washington state delivered soaring, passionate renditions of her tunes 'Dying Day,' 'The Story' and 'Dreams,' and closed with a fierce version of Johnny Cash's 'Folsom Prison Blues.'

Music City Roots executive producer Todd Mayo later confirmed that the deafening reception Brandi received was indeed the most enthusiastic crowd response for any artist who has ever appeared on the show.

It's pretty difficult, however, to feel sorry for acts like Mike Farris and Jason and the Scorchers, who were both faced with the proverbial "tough act to follow," but whose eardrum-piercing vocals and whirling dervish, punk-inspired dance moves, respectively, kept the show well afloat even after Brandi had finished her set.

The highlight of soul-gospel wailer Mike Farris' set was a beautiful new tune titled 'The Night the Cumberland Came Alive,' a reference to the Nashville river which overflowed its banks during last month's flood. In the fall, Mike and his band will release a live EP, with profits from the sale of the disc designated for the flood relief effort.

Before the night's usual all-artist jam, Jason and the Scorchers reminded longtime Music City residents why they were one of the most important and influential acts coming out of Nashville in the early '80s. Early purveyors of a dizzying hybrid of traditional country and punk (think Hank Williams meets the Ramones), Jason and band proved they've lost none of their luster as they tore through a handful of tunes including a few from the recently released CD, 'Halcyon Times.' One of those songs, 'Moonshine Guy,' sounds like the kind of Celtic jam that wouldn't be out of place in a raucous Irish pub. (And we'll drink to that!)

Before sending everyone home, all of the night's acts took the stage one last time for a sweet version of the folk-blues classic, 'Goodnight Irene.' If Disney World is the "happiest place on earth," surely Nashville is the most fortunate place. And in a two-month period that started out with an event that makes such an audacious statement as that pretty hard to believe, it's nights like these, filled with pure musical bliss, that make such a statement awfully hard to dispute.

Accentuating Music City Roots' growing reputation for bold experimentation, both musically and visually, Wednesday night's show was their first to be filmed in high-definition. Fans who couldn't get tickets to the show were able to watch online, and of course, could hear it live on WSM radio. But this is one show that week-after-week is becoming a must-see.

More on Music City Roots
Filed Under: Jason and the Scorchers, JasonAndTheScorchers
Categories: Country News
Comments
Leave A Comment
Back To Top