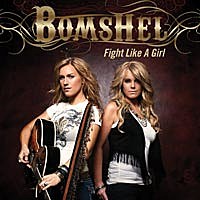 Kristy Osmunson and Kelley Shepard's first meeting, just prior to joining forces as Bomshel, was a memorable one. Even though they were both performing separately on the same stage at an event in Michigan (Kelley's home state), Kristy was immediately drawn to Kelley's powerhouse voice and just had to talk to her -- and talk they did!

"I called Kristy back and we talked to two o'clock in the morning just like best friends do," Kelley says. "I'd never really met somebody who became an instant friend like that. It's real funny because we are so different, complete opposites, night and day, but for some reason, it totally works."

Now roommates in Nashville, Kelley and Kristy (who hails from Idaho) have released their first full-length album as Bomshel. With the exception of one track (a rip-roarin' cover of No Doubt's 'Just a Girl'), the duo had a hand in co-writing every track on 'Fight Like a Girl.' And those "complete opposites" shine through on the entire record.

"Every song you hear it's going to be us," says Kelley. "You'll hear our fun side and our sad side. We have some really traditional country on there and some really poppy stuff."

Perhaps no other cut on the album embodies that spirit than the heart-tugging title track. The empowering theme inspired by Jenny, a friend of Kristy's who was, at 26 years old, diagnosed with breast cancer at the same time she was expecting a baby. While Jenny fought the cancer for years, she lost the battle just after her daughter Grace turned eight.

"[Jenny] said 'you guys inspire me' and I'm sitting there listening and thinking this is so backwards," says Kristy. "I was out running on the river and was really angry about the whole situation and the song title just came to me."

"I really wanted to gear it towards all women," says Kelley of the song they wrote with frequent collaborator Bob Regan. "With our moms, sisters and grandmas and I've always really admired their persistence through the tough times. I think women have an amazing ability to endure. It's a positive thing to fight like a girl because girls are a lot stronger on the inside. We don't want to put one meaning on this song. We want people to take it however they want to take it. Whether they are a little girl or a woman struggling with something they really can't control. We don't want it to just be the cancer song because everyone has their own story."

The duo recorded much of the album at a studio in the house they share. "I love that I can do my own vocals because I'm a real control freak about my vocals," Kelley admits. "The cool thing about it is our record sounds exactly how we wanted it to be."