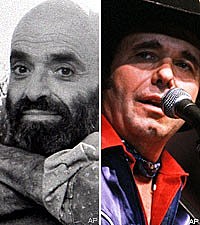 Bobby Bare and author/songwriter Shel Silverstein were great friends, as well as mutual admirers of each other's work. Now Bobby is producing a tribute to his late friend titled 'Turnable, Twistable Man.' The album of Shel's songs will feature a cross-section of talent, including Kris Kristofferson, Ray Price, Bobby Bare Jr. and My Morning Jacket.

"We're using some of Bobby Jr's friends and a few mainstream country stars," Bobby told The Boot in an exclusive interview about the album. "I had always wanted Kris to sing 'The Winner.' Ray is singing 'Me and Jimmie Rodgers,' and My Morning Jacket recorded 'Lullabies, Legends and Lies.' Todd Snider does 'A Boy Named Sue,' which Johnny Cash recorded, and man did he ever get the job done! John Carter [Cash] co-produced that one song."

Another notable track on the 14-song disc is Billy Bob Thornton's version of the 1972 Dr. Hook hit, 'Sylvia's Mother.' "It's good, he surprised me," Bobby admits. "He doesn't sound anything like what his movie image is; it's more like the Eagles or the Byrds."

The author and illustrator of acclaimed children's books, such as 'A Light in the Attic' and 'Where the Sidewalk Ends,' Shel Silverstein died in 1999 at age 68. He was, says Bobby, "a very visual writer. When you heard one of his songs it was like watching a movie. That's how I sang his songs, watching this movie unfold. The first time he sang 'The Winner' for me, I had to make him quit in the middle of it, I was laughing so hard."

Bobby was a fan of Shel's songwriting long before he met him, an introduction which happened thanks to the late Chet Atkins. "One of my all-time favorite songs is 'The Ballad of Lucy Jordan,' which was a huge hit for Marianne Faithfull in Europe. I didn't know until years later that Shel wrote it. The same thing with 'Time,' which Burl Ives sang. When I recorded 'Sylvia's Mother' for Mercury, I didn't have any idea who wrote it, I just liked it and cut it."

By the time they finally met, Bobby and Shel became fast friends. "Making records was fun with Shel," Bobby recalls. "When you were working with Shel, you were always into something that was right on the edge."

Bobby recorded numerous Silverstein songs and did two albums of nothing but Shel-penned classics -- the children's album 'Singing in the Kitchen,' the title track of which was a country hit, and the double-album set 'Bobby Bare Sings Legends, Lullabies and Lies.' He had several hits from that package, including 'Marie Laveau' and 'Daddy, What If.'

Bobby says he's confident that 'Turnable,Twistable Man' will introduce Shel's songs to a whole new generation of fans. "All the young kids, a lot of them have never heard 'A Boy Named Sue' or 'Sylvia's Mother.' But they're so visual, so entertaining, that they've got to like them."

But foremost in Bobby's mind while putting the project together was whether the honoree would like the recordings. Now that the album is nearly completed, he believes the author would. "I know he would have loved the album. Shel didn't like modern country, new country at all. His favorite singer was Ernest Tubb, if that gives you any indication, so we kept asking ourselves if Shel would like what we were doing. I think he would."

'Turnable, Twistable Man' is due out on Sugar Hill Records this fall.