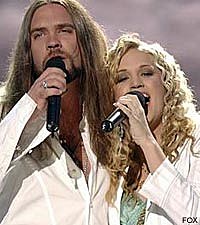 Bo Bice may have come in second to Carrie Underwood on 'American Idol' in 2005, but the singer says he still feels like the big winner in the overall scheme of things, despite setbacks he endured after the show. Though the Alabama native had numerous health problems following his 'Idol' appearance and eventually lost his record deal with RCA, Bo says seeing Carrie on TV winning awards like ACM Entertainer of the Year, fills him with pride and contentment, not jealousy or regret.

"I'm just so proud of her, not only for the award, but being the first female to win the award two years in a row," Bo tells the Huntsville Times. "I'm just being candid ... Some wonder if there's ever been a moment, when I was standing on the stage and they called out Carrie's name, I thought that should have been me. There's never been one moment I thought that should have been me, and the true reason is that God gives me every day to sit and look in my kids' eyes. I've got gold records, really cool guitars, a Harley, all the little toys, but the things that make it so worthwhile are the kids. I get the best of both worlds."

Bo is gearing up for the release of his third album, 'Bo Bice 3,' on May 18. The CD features a mix of blues, rock, and country and includes an appearance by A.J. Croce, son of the late Jim Croce.