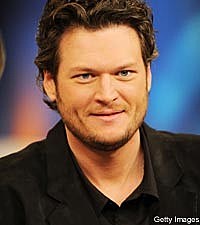 "I look like I'm going to church!" says a beaming Blake Shelton, who has traded his usual plaid shirt and jeans for a shiny black suit for his Grand Ole Opry appearance. "Can you believe they let me on this show?"

Blake invited The Boot backstage for a quick chat before wowing the Opry audience with his performance of the title track to his brand-new album, 'Hillbilly Bone.' The project is what he and his record label, Warner Music Nashville, are calling a 'SIX PAK,' as it only has half a dozen tracks. That doesn't mean the Oklahoma native is any less proud of this CD than he is his previous five studio albums ... And yes, it is an "album" -- something Blake hopes to help make a comeback in the sales department.

We talked to Blake about some of our favorite tracks on 'Hillbilly Bone.' And for the notoriously hilarious guy who's constantly cracking jokes, we caught a rare moment of seriousness as he talked about the future of his relationship with fellow country star, Miranda Lambert.

The first question on everyone's mind is, why just six songs? Do you think this is the wave of the future, in terms of country music sales?

I honestly don't know. Is this album gonna make history or be history? [laughs] Nashville has been looking for ways to try to get people back into the stores and buy albums again. You hear a song on the radio these days, and you just pull out your phone and buy it off the internet right then, and you forget about it. We're looking for ways to remind people that we still make albums, and there's still cool music that you may not hear on the radio. So we decided to do a six-song album, and it's really cheap! It's like five dollars and change.

And you already have plans for another SIX PAK later this year.

Yeah, the thing about it that is appealing to me is that I can put out more music by doing it this way, rather than by putting out a 10 or 12 song CD that we put out every two years. With a SIX PAK, we can put three of them out a year if we want to. I don't know what's going to happen, but we've got to try something. And for the most part, people will still hop on the internet and download 'Hillbilly Bone,' and that'll be what they get. And we all know that, but we're just trying to remind them that there is other music that we make.

Clear up a rumor for us about your 'Hillbilly Bone' video with Trace Adkins. Were you really drunk in it?

I was absolutely drunk by the end of the video! There's a couple of shots there where I'm drinking straight out of the bottle of wine, and it's not a prop! It's truly wine. And I haven't drank wine since that day.

So you weren't feeling so great the next day, huh?

No, I did not feel good at all.

'Kiss My Country Ass' is another favorite track on the album.

It may be one of my favorite songs I've ever cut. I call it my theme song. Rhett Akins co-wrote it, and I've seen him sing it so many times through the years. I always told him, "Man, if I ever get a chance, I'm gonna cut that song." At this point in my career, with people knowing what they know of me, it's the song they'd expect to hear me sing. It's already become a fan favorite from just doing it in my live shows. 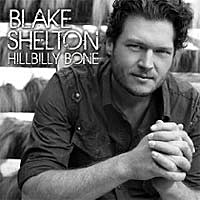 We can say "ass" here on The Boot, but a lot of country radio stations won't play that song because of that word. Would you ever consider changing the lyrics for a radio-friendly version of the song?

No, because if you change the lyrics to 'Kiss My Country Ass,' you may as well not sing the song to begin with. The whole idea of the song is that I'm this guy, and if you don't like it, get away from me. Some radio guys have gotten this album early, and I've been getting calls ... Everyone wants to be the person to say, "I'll play that, and none of these other wusses will." It's the one song we thought would never get played, and it's a big deal when they do play it. It's never going to be a big radio hit, but I do think it's going to be a song that has impact on my career.

So you won't be pulling a Zac Brown and say, for radio, "kiss my country toes."

I hope not, because that is disgusting!

What song are you rooting for to be a big radio hit?

My baby on this album is 'Delilah,' because I wrote that song by myself one day last year on the tour bus [while I was] babysitting Miranda's dog, whose name is Delilah. I was supposed to be petting and feeding it, but it was so upset that Miranda had left for the day that it was ignoring me. So I that's my baby on the album, but I also think 'You'll Always Be Beautiful' is a really special song.

Speaking of Miranda, when we posted on Twitter that we were interviewing you, we asked readers to turn in questions to ask you ... And I can't tell you how many people want to know, "When's he gonna put a ring on it?" So, to satisfy your fans' curiosity ... ?

I don't know the answer to that question, but I'll tell you this ... Miranda and I have been together almost five years now. We've had our ups and downs, our high points and low points, but I do think that we're stronger together now than we've ever, ever been. For the first time, I can see that [engagement] happening, and she can too ... So who knows?

Watching you watch her on the Opry tonight, you just had this intense adoration in your eyes ...

She's one of the next big superstars of country music, and it's exciting for me just to watch it happen for her.

And luckily she's a good sport, too ... because you're on this whirlwind media tour right now, and we know, if history repeats itself, that the likes of Kathie Lee Gifford, Chelsea Handler and Paula Deen are going to be flirting with you!

So what's been your most embarrassing moment on TV?

Probably the time I messed up the words to the national anthem at Talledega for one of the NASCAR races there. It wasn't a train wreck ... I just sang the first verse two times. But I just tell people it's because that's my favorite verse of the national anthem!

You're a fan favorite, a radio favorite, hugely successful in this business ... So what are you going to do to become an industry favorite, or is that something that even concerns you?

That's always been a piece of the puzzle that's been missing for me, is being recognized for accomplishments. I can tell you this -- not having had them hasn't held me back. But it's also probably kept me from doing everything I want to do. But I've been lucky enough to have some success in this industry, and I think I'm slowly but surely winning Nashville over. I'm an odd duck for them, and it's taken them a while to warm up to me. And they've tried to get rid of me a few times, and it didn't happen. So I think they feel like now, if you can't beat 'em, join 'em! I think we'll see the industry embrace me more in the next couple of years.

Well, there could be a lot of industry folks in the audience when you headline Nashville's Ryman Auditorium for the first time on March 18.

That's one of those steps we're taking a long the way, for the Nashville music industry to see what I've done. I don't think they even realize we've had five No. 1 hits and sold over 2 million albums. There's just so much coming at them that we sometimes get overlooked. We're gonna fill it up with as many fans as we can, but we're gonna get the industry in there, too!