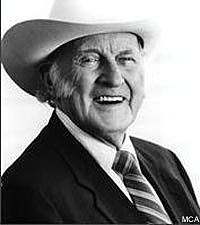 He developed the style of music known as bluegrass over a performing career that spanned 60 years. Often referred to as "The Father of Bluegrass," Bill Monroe is enshrined in both the Country Music Hall of Fame and the Rock and Roll Hall of Fame. In 1993, three years before his passing, he received the Grammy Lifetime Achievement Award. Today, nearly 14 years after his death, the life and times of the bluegrass legend will be immortalized in a biopic film.

Still in the early stages of development, The Wrap reports that the film is a 'Walk the Line' kind of project, to be directed by Finn Taylor ('The Darwin Awards'). Peter Sarsgaard -- currently in theaters with 'Knight and Day' -- is set to star in the lead role.

It was Sarsgaard, an avid fan of Monroe's music, who put the project in motion when he approached Oscar winning screenwriter, Callie Khouri ('Thelma and Louise') to do a re-write of the early script. Khouri recently wrote, directed and produced ABC's 'Hollis & Rae,' and directed 2008's 'Mad Money.'

Khouri also provides another country music connection here ... she happens to be married to celebrated music producer, T Bone Burnett, who won a Grammy for the 'O Brother, Where Art Thou?' soundtrack, his work with Alison Krauss and Robert Plant, and Oscars for his songwriting contributions to 'Cold Mountain' and 'The Weary Kind' from the film, 'Crazy Heart.'

Born on a farm, the youngest of eight children, Bill Monroe's best known songs include, 'Uncle Pen' and 'Blue Moon of Kentucky,' the latter which was covered by Elvis Presley in 1954.

Monroe's touring and playing career came to an end when he suffered a stroke in April 1996. When he died on September 9, 1996, four days before his 85th birthday, Emmylou Harris said, "We all knew that if he ever got to the point that he couldn't perform, that he wasn't going to make it. Music was his life."