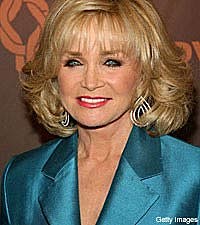 Barbara Mandrell is proud of female stars like Carrie Underwood, Martina McBride and Taylor Swift, who headline their own big tours. The country legend knows how hard it is for a woman to branch out from opening act to main attraction.

"Loretta Lynn, Tammy Wynette, Dolly Parton and I were the first female headliners, where we would book our own opening acts," Barbara tells The Boot. "Before that, it was a standing joke that it was more like we had 'pretty little girl singers' opening for a male headliner."

Now, Barbara just wants to see more of the ladies strap on their dancing shoes.

"I don't know anybody in this business, other than my sister Louise and I, who really dance," she says. "I had four male dancers on stage with me. It was demanding and some of it pretty darn dangerous! I was having a conversation with another female artist, who will remain nameless [laughs], and she said to me, 'You really busted it out there for this number. But if a guy just so much as wiggles his hips out there, people go crazy!'"

The Country Music Hall of Famer is not about to bring dancing back to country. She's hoping someone like Julianne Hough will do that for her. Barbara is happily retired and insists the only place she'll sing these days is "on the pew with everybody else in church."