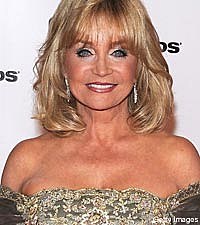 Fans can now visit the majestic place Barbara Mandrell and her family once called home. The Whites Creek, Tenn. property, called Fontanel, was purchased in 2002 by Dale Morris and Marc Oswald, who work with such artists as Kenny Chesney, Gretchen Wilson and Big & Rich. It has been rechristened the Fontanel Mansion and Farm, a new tourist attraction that opened to the public for the first time on Monday, June 7.

The complex offers a new eatery, the Farmhouse Restaurant, a gift shop, free trails and a tour of the mansion, which includes personal collections and photos from Barbara Mandrell and a host of other celebrities. The Mansion at Fontanel is three stories tall with more than 20 rooms, 13 bathrooms, five fireplaces, two kitchens, an indoor pool and indoor shooting range on 136 acres of land.

During the official opening this week, a free tour was given to members of the press and a handful of VIPs. It began in the restaurant with a private performance by John Rich, who played Johnny Cash's 'Ring of Fire,' saying that he wanted to perform "something old to break in something new." He also explained that the property has a rich history, mentioning that in the spot where the gift shop stands, his Big & Rich partner Big Kenny used to live rent free.

The Farmhouse Restaurant uses only locally-grown produce and will also have a teaching garden to bring in local people and tours. The complex, which has been unofficially dubbed as the 'Country Music Home of Fame,' will also have a 6,000-square-foot television and production studio, and two national television shows have already signed on to broadcast out of the facility.

The Woods amphitheater has an amazingly large stage and state-of-the-art production, including a lighting grid that can hold 23 tons of equipment that lowers and raises via a remote. The venue can currently seat 2,500, with 13 sky boxes built like log cabins, in keeping with the theme of the home and the rest of the grounds. Next week, the world-class venue, which can host any act imaginable, will announce their first concert taking place in mid-July.

Barbara's daughter, Jaime Dudney, has signed on as Director of Hospitality, even though it had been nearly a decade since she had been in her former home. "I'm super passionate about this," Jaime tells The Boot. "It's hard for anyone to leave their childhood home, and sell it. It doesn't matter how big the house is, what kind of house it is, where you live, it doesn't matter. It's always emotional to leave your childhood home. So, for eight years I never stepped foot in this house. Of course I heard about all the parties going on here and the television shows that were shot here and the music videos. So, at that time, it was like, 'Oh, I miss that house,' and I had all these uncomfortable feelings. And then I read the article in the Tennessean (newspaper) in November about Marc and Dale's plans for this house. And I said, 'Oh my goodness, I need to be a part of this.' So, for the past four months, I've been getting together old family photos and trying to make it real personable and trying to represent the Mandrell and Dudney family. And I've been enjoying all the other artists represented in the house and getting the rest of the house ready for tourists. For the past two weeks, I've been training my tour guides and they're so awesome and they're so talented. I walked upstairs and they were singing, 'Mountain Music' by Alabama. It's just one creative home."

About her new title -- Director of Hospitality -- Jaime says it means, "that I want to welcome people and make them feel at home, which is the way Mom and Dad always raised me to be, so it's kind of a tailor-made job for me. I don't know what else will happen or what they'll have me do or dream up. I mean, really, the sky is the limit. We can do anything we want to in here. We could have plays in here if we wanted to. We have a wedding in a couple of weeks that's circus performers. So, we have trapeze artists swinging from the logs. We have all kinds of incredible things going on."

This week, to celebrate the opening, Fontanel will feature live bluegrass music and autograph signings by John Rich and Gretchen Wilson for CMA Music Festival.