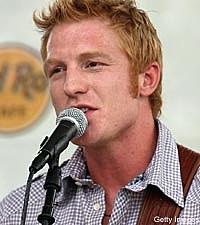 Ash Bowers is a dad! On Friday, June 25, the singer and his wife Jennifer welcomed their first child, a boy named Elan. Both baby, who weighed in at 6 lbs., 7 oz, and mom are reportedly doing well.

Ash will only enjoy a few weeks at home with his son before he's back on the road with Jason Aldean on the Wide Open tour. The time away from his family is likely bittersweet, as he juggles fatherhood with lofty career ambitions.

"I would like to see myself where Jason is in five years, headlining a tour, doing arenas," Ash admits to CMTT. "I didn't sign up for anything less than that."