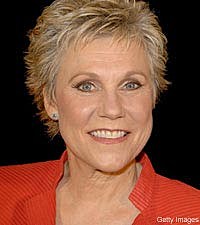 Anne Murray has spent two thirds of her life as a singer, blazing plenty of trails for her fellow female Canadian artists throughout the course of her career. She was the first female Canadian solo artist to top the U.S. charts, the first to earn a gold record (for the 1970 tune, 'Snowbird'), and she's sold 54 million albums to date. So, Ann figures this is as good a time as any to put on the brakes.

The legendary singer tells the Contra Costa Times that her 2008 'Anne Murray's Christmas Album,' will likely be the last record she ever makes. "I've been doing it for 41 years. I'm grateful that I feel comfortable in the fact that I'm not going to be doing it anymore, and I didn't know that I could come to this, but I can still sing ... and what better time to pack it in than that?" she says.

Even if Ann puts her singing career to rest, she's still an accomplished author. Her latest book, 'All of Me,' was No. 2 on Canada's best-seller list.