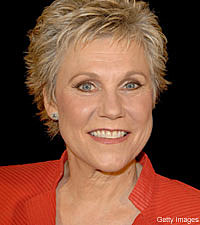 When Anne Murray set out to pick some of her favorite Christmas songs for her new 'Anne Murray's Christmas Album' she says she had a pretty easy task.

"I chose all the 50s things, like 'Rockin' Around the Christmas Tree' and 'Jingle Bell Rock,'" Murray tells The Boot. "Those songs were very much a part of my childhood. I grew up in that rock 'n roll era so those are the songs I liked best at that time. I thought it would be kind of fun to do those on the new album."

Murray also chose some traditional numbers, including 'Baby It's Cold Outside,' on which she sings with pop crooner Michael Buble. "It's right up his alley," Murray says of Buble. "He did a great job but that didn't surprise me, because he's a great singer."

Ten of the songs on the 15-tune CD are from Murray's two previous Christmas albums. "This one is the best as far as I'm concerned, with the Christmas songs that are nearest and dearest to me," she explains. Among the other tunes are 'Have Yourself A Merry Little Christmas' with Diana Krall, a song the two of them performed on a CBC television special in 2001. The day of the taping they decided to sing the carol as a duet, and that version is what is included on the new album.

Murray 's fans don't tire of listening to her perform the classic carols. "Over the years I've had people telling me that they really enjoy hearing me singing Christmas songs so I tried to select songs for this album that capture the tradition of Christmas." Among those fans is her daughter, Dawn, whom Murray says "calls me the Mistress of Christmas. She's been hearing my songs since she was little, but she still listens."

Anne has her favorite albums that she pulls out when she starts to decorate her house for the holidays. "I put on either Perry Como or Bing Crosby, the old faithfuls, and I always go for the songs that are tried and familiar. I remember when I was doing my first Christmas album, I thought, 'Wouldn't it be nice to find new Christmas songs?' Then I went, 'Are you crazy?' When I decorate my tree I don't want new Christmas songs, I want to hear all the familiar songs!"

Included on 'Anne Murray's Christmas Album' are 'Joy to the World,' 'Silent Night,' 'Oh Come All Ye Faithful,' 'Go Tell It On The Mountain,' 'Blue Christmas,' 'Let It Snow,' 'Away in a Manger' and 'White Christmas.'