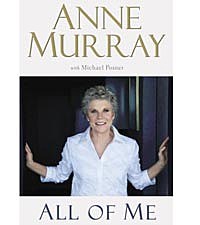 When Anne Murray broke through with her hit song, 'Snowbird,' in 1970, she had no idea of the kind of success that it would bring her. Anne reveals the journey that took the small-town girl from Springhill, Nova Scotia, to cities around the world, in her new autobiography, 'All of Me,' which hit stores this week.

Anne, the only girl in a family of five boys, grew up a tomboy who had no problem in the rough and tumble world of her siblings. No doubt that upbringing prepared her for the climb to the top in the world of music -- a climb that while seemingly happened overnight, was really a road filled with frustration before the singer was able to take charge of her career.

While Anne's true love was always music, she worked on various television shows during summers in between her college courses. After graduation she taught high school until she was offered a permanent job with 'Singalong Jubilee,' a national television show based out of Halifax. Soon thereafter, Anne made her first album with producer Brian Ahern, who went on to work with her on the next ten projects.

The singer, who went on to sell 54 million records, wavered between pop and country, placing songs at the top of both charts. She is quite candid about that in the book, revealing that Capitol Records would have preferred she pick one genre of music and stay there, despite the success she was having for them. In addition to 'Snowbird,' her hits included other crossovers like 'Danny's Song,' 'A Love Song,' 'You Needed Me,' 'You Won't See Me,' 'Could I Have This Dance,' 'A Little Good News' and 'Just Another Woman in Love.'

The Canadian singer is quite forthcoming about other topics in the autobiography, as well, including her affair with a married man, the stars who hit on her after she was a celebrity, and the learning curve she went through while she tried to gain control of her career. She also talks about her marriage and what brought it to a close, the time spent on the road away from her children and how she dealt with her daughter's battle with anorexia.

"I was swept up like Dorothy in The Wizard of Oz, and catapulted into a strange new universe," writes Anne. "I was lonely and tired. My privacy was constantly being invaded. I was in love with a married man whom I seldom saw. I was touring with a group of musicians who at any moment were at risk of being arrested. What I wanted most was to stop and go home, but it wasn't possible. I had commitments and obligations as far as the eye could see."

One the hits started, the climb didn't get easier. Anne had to deal with a band that abused alcohol and drugs and her own stage fright; a stalker who stayed round for almost 20 years; and the death of her manager and best friend. She talks about the people who helped her along the way, like Glen Campbell, along with other celebrities she met including presidents, kings and queens, plus big names in entertainment like Willie Nelson, Kris Kristofferson, John Lennon, Kenny Rogers and Perry Como.

Anne presents a very honest look at her career and her private life, one that most of her fans probably have not known before the release of this book. In looking back over her life, Anne says, "If I regret anything, It's that I didn't take enough time for myself and my family. Having to leave my children crying at the door as I flew off made me miserable."

After the release of her 'Duets: Friends and Legends' album, which featured a who's who of performers including Martina McBride, Emmylou Harris, Celine Dion and Sarah Brightman, Anne made the decision to retire. "After being on tour for most of my adult life, the time was right to stop and reflect," she explains. "The years pass so quickly when you're on the road, and besides," she adds with a chuckle, "I thought it was important to do this memoir, while I can still remember things!"

'All of Me' was written with journalist/author Michael Posner. Order it here.