Some of country music's biggest names were on stage in Nashville Monday night to celebrate and raise money for the Country Music Hall of Fame for Keith Urban's second annual All for the Hall benefit show.

Keith kicked off the unforgettable night with a scorching rendition of 'Kiss a Girl,' followed immediately by 'Days Go By,' before paring it down to do 'Stupid Boy,' and then welcoming the wall-to-wall crowd at Music City's Bridgestone Arena. He then launched into his new single, 'Put You in a Song,' as well as his multi-week No. 1 hit, 'Somebody Like You,' before a short set change and the star-studded 'Heroes' themed show kicked into high gear.

Vince Gill, was on stage along with Keith and several of the town's hottest musicians, including producer-guitarist Dann Huff, piano man John Hobbs, drummer Eddie Bayers, steel guitarist Paul Franklin and bassist Michael Rhodes -- all of whom served as the house band. Vince performed '
One More Last Chance' before pulling out his Heroes' card of the
Delbert McClinton tune, '
Two More Bottles of Wine,' made famous by
Emmylou Harris.

Martina McBride was up next with 'A Broken Wing,' which received a standing ovation for her vocal tenacity. She told the two guitar-slingers, "Too bad you couldn't find a good band," before kicking into Reba McEntire's 'Is There Life Out There.'

Billy Currington showed up with guitar in hand to perform the sexy 'Must Be Doin' Somethin' Right,' to the delight of the females in the audience. He followed that up with an acoustic version of Kenny Rogers' 'Sweet Music Man,' featuring Vince and Keith on background vocals, and turned it into one of the night's biggest vocal highlights. 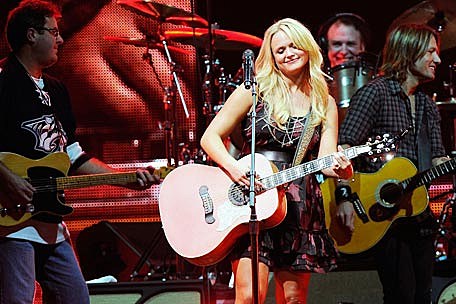 Miranda Lambert, who is up for nine CMA Awards, was introduced by Vince who said she has one of the best songs of the last "20 or 30 years." How appropriate it is that she chose to sing 'The House That Built Me,' which took on a dual meaning that country music built the Hall of Fame and in turn, "built" her career. "It's not every day you get to have Keith Urban and Vince Gill backing you up," aid Miranda, flashing her pearly whites in a big grin. It's no secret the blond bombshell cites the legendary Merle Haggard as her biggest influence. No offense to her betrothed Blake Shelton, but she once said in an interview she wanted to marry her hero. She then strapped on her guitar and sang her way through the Hag's 'The Bottle Let Me Down.'

Keith then dedicated his hero Don Williams' first No. 1 hit 'I Wouldn't Want to Live If You Didn't Love Me' to his wife Nicole Kidman, who was in attendance.

Country Music Hall of Famer Charley Pride reminded the crowd what the night was all about, celebrating country's diverse musical heritage. He performed what he called his biggest hit, 'Kiss an Angel Good Mornin',' before channeling Conway Twitty in 'Hello Darlin'.'

Alan Jackson was next with 'Chattahoochie,' followed up by the decades-old 'Mind Your Own Business,' recorded by both Hank Williams and his son, Hank Williams Jr. Alison Krauss put a little levity in the night with a gospel hymn and Shenandoah's 'Ghost in This House,' which she later recorded.

Pop star John Mayer flew in from Milan, Italy to perform his own 'I'm Gonna Find Another You' and to pay tribute to his country brethren with a cover of Dwight Yoakam's 'Ain't That Lonely Yet,' featuring heated guitar solos by Vince, Keith and John.

The legendary Dolly Parton, who said "one of the greatest moments of my life was when I was inducted into the Country Music Hall of Fame," brought laughter, smiles and tears when she came on stage. She performed 'Jolene,' before flirting with both Keith and Vince, as well as one man in the audience who dared to shout, "I love you, Dolly." She told him, "I love you too, but I told you to wait out in the truck." How she went from that to George Jones' 'He Stopped Loving Her Today,' is certainly a mystery. "Country music has these sad songs," Dolly said before introducing the country classic, "and some of 'em are just plumb pitiful."

Keith and Vince wrapped up the night with another Don Williams' tune, 'Tulsa Time,' and they were later joined on stage by Dolly, Alan and Martina. Keith seemed to have so much fun that he said, "Let's do it again next year!" We're going to hold him to that promise.