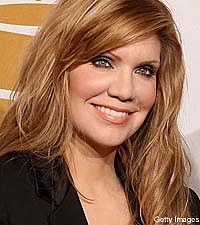 Rounder Records, the renowned American record label of roots music, is marking its 40th anniversary with a special concert on Monday (Oct. 12) at Nashville's Grand Ole Opry House. Performers at the event will include Alison Krauss and Union Station with Jerry Douglas, Bela Fleck, Mary Chapin Carpenter and R&B legend Irma Thomas, as well as other acts to be announced. Actress and singer Minnie Driver will serve as both host and musical performer.

According to a press release, ticket proceeds from the show will go to the NARAS Grammy in the Schools programs "to cultivate the understanding, appreciation and advancement of the contribution of recorded music to American culture." The concert will also be taped for a PBS special to air in March.

Singer and fiddle player Alison Krauss has spent nearly her entire recording career on Rounder starting with 1987's 'Too Late To Cry.' "Some of our favorite music has come out on Rounder," she recently told The Boot. "I used to stare at the album covers and the label on the actual LP. I thought, 'If I ever got to record someday, I hope it would be on this label.'"

Rounder Records was founded in 1970 by Bill Nowlin, Ken Irwin and Marian Leighton-Levy from Cambridge, Mass. Since putting out its first record in 1971, the label has developed an eclectic roster of artists that has includes Nanci Griffith, Son Volt and Steve Martin.