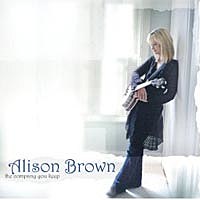 Grammy Award winning Bluegrass banjoist Alison Brown may be the co-founder and co-owner of Compass Records, but she never strays too far away from performing, as evidenced by her jam-packed 2010 touring schedule.

Fans through the U.S. are in for a treat, as Alison -- a former member of Alison Krauss and Union Station and frequent performer on the Grand Ole Opry -- tours behind her latest album, 'The Company You Keep.'

"It's like most things," says Alison of taking time to tour. "You make the time, book the babysitters and go."

That's how Alison found the time to record this new album, the title of which was taken from the line by Spanish writer Miguel de Cervantes that reads "Tell me the company you keep, and I'll tell you who you are."

Alison credits her work with Union Station and with Michelle Shocked for helping her understand the strong community among players that strengthens their individual offerings. "For me, the dream had always been playing Bluegrass music from people with that culture," said Alison. "Traveling with Union Station, I really became more integrated in the music community as a whole -- the musicians, the fans, the whole of that community."

Working with Michelle, who was a master at improv, also opened Alison to further her musical reach. "Michelle toured on a rock 'n roll level, with big festivals, big crowds, sharing bills with Bob Weir and The Band," Alison reflects. "One year at Telluride [Bluegrass Festival], she was going to sing a song and none of us had brought the lyrics; she just improvised, right there. She's amazing."

Alison Brown's 'The Company You Keep' is in stores now.