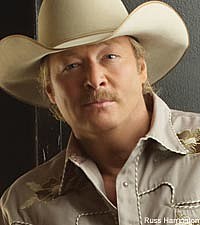 After putting their homestead on the market nearly one year ago, Alan Jackson and his wife, Denise, sold their 135-acre spread for $28 million, $10 million less than the original asking price, according to NashvillePost.com. The buyer is a trust in the names of Willis and Reba Johnson. Willis Johnson is founder and chairman of the Fairfield, Calif., auto salvage firm specializing in online car sales. He is said to be worth more than $340 million.

The listing featured 18,600 square feet of living space, a 20-car garage, gymnasium, log cabin, barn, man-made lake and boathouse. The Jacksons built the home on an old horse farm they bought in 1993, and even at $28 million, it is the single biggest residential sale in the Nashville area since the late '90s. The previous record holder was Tanya Tucker's 500-acre Williamson County home, which she sold in 2007 for $11.4 million. It is now being turned into a golf course, with her home serving as the clubhouse.

Alan had always wanted a house like the one he just sold. "Even when I was a young man and a boy and poor and just getting by, I always dreamed of that big house like that," Alan explains. "I mean 'Gone With the Wind,' that was what I always wanted. I wanted Tara. I wanted that house with the big columns, because I'm from Georgia and I love that Southern plantation thing. That was just me."

Alan and Denise had a good reason to put their home up for sale last year. "Since our daughters are getting older, we're kind of looking ahead the next five or six years where we're going to end up," the superstar says. "We're just planning ahead, and that's a really big place out there, and we're thinking we may not spend as much time in Nashville once the children are gone. We love it out there, but it's a big handful of property. The girls have all grown up there and it's been a wonderful place. I've owned it for 17 years, and they've all grown up there and had a lot of memories there. It's served its purpose."

Alan is currently hitting the airwaves with his single 'Hard Hat and a Hammer,' the latest from his album 'Freight Train.'