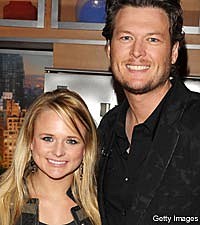 Miranda Lambert, Blake Shelton and Trace Adkins were early winners at the Academy of Country Music Awards this year during an off-camera presentation on Saturday night.

Blake and Trace won the Vocal Event of the Year for their recent No. 1 single, 'Hillbilly Bone,' which took Blake by a bit of surprise. "This has been an amazing year for me," says the singer. "If you would have asked me 10 years ago when I started out that I would have an Academy of Country Music Award and a performance on the award show, I would have thought you were pulling my leg."

Also adding to the sweetness of his win is the fact he won with his friend, Trace. "Winning an award with your friend makes it even more special." In addition to thanking Trace for agreeing to do the song, he also thanked his managers, band, crew, country radio, record label, producer and "of course the best for last ... my fans. I love you guys!"

Blake's girlfriend, Miranda, received Video of the Year honors for her chart-topping 'White Liar.' The clip features a guest appearance by Jamey Johnson, who ends up getting the girl at the end.

The blonde fireball, who is fighting a sinus infection, is also up for five other awards, including Album of the Year for 'Revolution.' It's an award she won two years ago for her sophomore album, 'Crazy Ex-Girlfriend.' "I didn't think for one moment I would win," Miranda tells the Las Vegas Sun. "You actually don't hear your name. You totally blank out. you don't believe it when they say it. Blake had to poke my side to get me out of my seat!"

All three are set to perform during Sunday night's live telecast of the 45th Annual Academy of Country Music Awards beginning at 8:00 PM ET/(delayed PT) on CBS.