Aaron Tippin has teamed with former Arkansas Governor Mike Huckabee and famed producer James Stroud for the new album, 'I Wanna Play!,' benefiting the national Association of Music Merchants Foundation's Wanna Play Fund. The lofty goal of the fund is to put a musical instrument in the hands of every child in the nation.

Tippin and Huckabee presented a check for $10,000 to Nashville's W.O. Smith School of Music on Wednesday (October 13) morning, which came straight out of the Wanna Play Fund. The school makes affordable, quality music instruction available to children from low-income families.

The compilation features songs by Lorrie Morgan, John Anderson, Darryl Worley, George Jones, Tracy Lawrence and Ronnie Milsap, along with Tippin's family -- wife Thea and children Thomas and Teddy. Huckabee, a former Republican presidential candidate, plays bass guitar. "It's a collaboration, and it started when Aaron was on my show," he tells The Boot. "He and I began to talk about love of music and how important it was to kids, and the more we talked, the more we realized we had some common interests. I told him about this idea I had about putting together a charity CD where we would make their profits go toward buying musical instruments for kids. Well, Aaron got all excited about it." 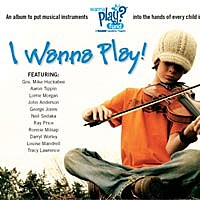 The love of music and of making music is overwhelmingly strong for the former Governor and current talk show host, who has performed with such acts ranging from Andy Williams to Lynyrd Skynyrd. "I got my first instrument, it was an electric guitar, when I was 11 for Christmas," he recalls. "My parents made a bigger sacrifice than I understood. It took them a year to pay for it. They ordered it from the JC Penney catalog. That guitar was more than a musical instrument, it was the instrument that I learned to come out of a real unbelievably shy personality and start gaining confidence. I wouldn't be where I am today had it not been for the lessons that I learned, not just from the guitar, but from all of the things that went with it."

Music changed Tippin's life and took him in a direction he never thought was possible. "What music has given me is the ability to write songs. It was learning to play guitar that gave me a place to start at becoming the songwriter that I am [today]," the singer tells The Boot. "It turned my life around. I was a professional aviator. That's what I did for a living. That's all I wanted to do, that's all I cared about. Music was the furthest thing from my mind. And when the energy crunch in the late '70s hit, I said, 'Well, what do I like best after [flying]?' So, I went home, and I took a job with one of my buddy's running his bulldozer and played the honky-tonks at night. It led me to the greatest thing in my life, my career and on top of that, my family. I met my wife, Thea, the boss, my owner, [laughs] right here in the music biz."

'I Wanna Play' is scheduled to hit stores and online retailers October 26.