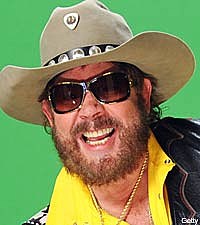 It's a well-known fact that you don't ask Hank Williams, Jr. a question if you don't want an honest answer. The Boot caught Hank while he was spending time at his place in Paris, Tenn., reflecting on the tragic loss of his friend, NFL great Steve McNair, as well as on a happier subject -- his new album, '127 Rose Avenue.' True to his nature, Hank was candid when he answered a few questions for The Boot about everything from playing jokes on friends to his guilty pleasures.

If you were going to be on a reality show, which would you choose?

I hate all of 'em! 'Fishing with Bocephus' is the one I'd be on.

What has surprised you most in your career?

Singing the 'Monday Night Football' theme. Who would ever have thought it would have lasted 21 years? Let's face it, that was a one-year deal with two one-year options that turned into 21. It's become an American sports signature. 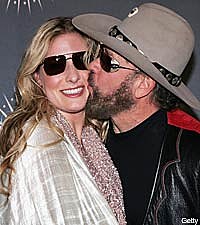 What irks you the most about the country music business?

If they don't add Holly's [Hank's daughter Holly Williams] record 'Mama' ... If they don't play my daughter they can kiss my ass.

What celebrity would you not want to be right now?

Probably [Los Angeles Dodger] Manny Ramirez because of the suspension [In June, Ramirez was suspended for 50 games for violating Major League Baseball's performance enhancing drug policy.] He is looked at as one of the greatest hitters who has ever played baseball.

Me and a few of my rowdy friends stole the wheels and tires off a brand-new limited-edition Lincoln Mark III that my manager, Merle Kilgore, had just bought. We left it up on blocks and then we sold his own wheels and tires back to him the next day. That's about the best one of all the jokes and pranks I've ever done. 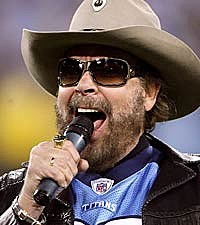 If you were going to duet with a rapper, who would it be?

Oh there's a bunch of them: Me and Bobby [Kid Rock] do it all the time. Probably Ludacris, and I would have sang with Notorious B.I.G., although he's gone.

If you could put together the world's greatest rock band, who would be in it?

That's kinda hard, let me see ... you'd have Steve Gaines from Lynyrd Skynyrd in it, Duane Allman, probably have Jerry Lee Lewis on piano and Jaimoe from the Allman Brothers on drums. And Leon Wilkeson from Skynyrd on bass.

What is your biggest guilty pleasure?

I like metal detecting, collecting Civil War artifacts, fishing, hunting, cigars, Labradors, the outdoor life, my baseball game, football. When you called, I was working on an old Civil War rifle. You must have hobbies! 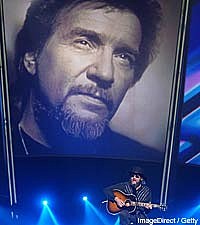 If you could have a conversation with anyone, living or dead, who would it be?

What song do you wish you had written?

Toy Caldwell's 'Can't You See,' by the Marshall Tucker Band.

Is there any secret left about you that the fans don't know?

Playing the banjo. I used to do that on stage, but I stopped doing that years ago. I guarantee you there's a bunch of the twentysomethings that don't know that, don't know I play banjo and bluegrass.