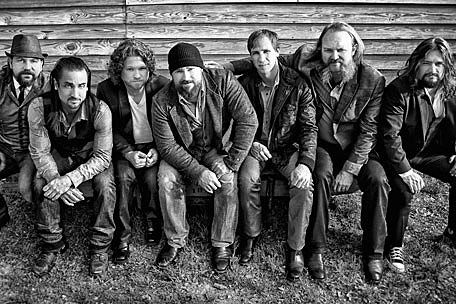 "No direction is the direction," Zac Brown Band multi-instrumentalist Clay Cook tells The Boot with a laugh when summing up the group's mindset making their third studio album, Uncaged.

Released this week, Uncaged is indeed unconventional, yet not unexpected for the Grammy winners, who have always defied genre. The tracks dabble in rock, R&B, reggae, soul, bluegrass and country, among other influences. Frontman Zac Brown insists the melodic variety was not contrived, as he and his bandmates are schooled in all kinds of music, but rather was serendipitous.

"We're a vocal band and then the kind of music we decide to put around it is whatever we want it to be for that song," he says. "Each song has its own life. People are like, 'You've got an R&B song on there?' You've got to listen to it. In a weird way, it all works together."

As eclectic as the album is, the band chose for the first radio single what Zac proudly calls "the countriest country song on the radio right now," the toe-tapping, feel-good "The Wind." Co-written with longtime ZBB collaborators Wyatt Durrette and Levi Lowrey, the track showcases the band's tight, lightning-fast musicianship.

"When we were putting this album together, we already knew this would be the first single before we even went into the studio," Clay recalls. "It sets the tone; it's happy. It's a country-bluegrass song by a rock band, and there isn't enough of that on country radio."

The song's brand-new video (watch below) was animated and directed by Mike Judge ("King of the Hill," "Beavis and Butthead"). Clay explains that they're all big fans of the TV icon, and the connection was made when Zac happened to meet him at a tattoo parlor in Los Angeles.

Other standout tracks on Uncaged include two love songs, "Goodbye in Her Eyes" and "Sweet Annie." The former is one of the most emotionally-charged heartbreak songs in the band's catalog, while the latter has a timeless essence to both its road-weary-and-lovestruck lyrics and its soothing, Southern rock sound. "Both started out with Wyatt Durette -- our best friend, our songwriter, our bartender [laughs]," Clay explains of the sentimental tunes. "Those are true stories for him. 'Goodbye in Her Eyes,' they've been trying to write for ten years. It finally came together during our arrangement process."

Co-written with reggae-pop star Jason Mraz, "Jump Right In" is, fittingly, the album's opening track. With its island-inspired groove, Zac predicts it will be "the song of the summer" ... next year. Other songwriting credits on Uncaged include Sonia Leigh and Nic Cowan, both artists on the band's own Southern Ground Records. Frequent ZBB tour partner Amos Lee contributes guest vocals to the thought-provoking "Day That I Die," while iconic New Orleans musician Trombone Shorty is heard on "Overnight," the R&B-soaked, overtly sexual song that would make Marvin Gaye blush.

Zac co-wrote 10 of the album's 11 tracks, putting a lot of focus on how each would sound during the band's live show, and not on what adheres to the country radio norm. 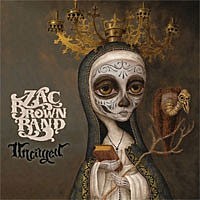 "We're not just going to take some songs from a focus group in Nashville where people are sitting around in a circle having appointments trying to write catchy songs so they can sell them to a band like us," explains the Georgia native. "You can tell all our songs come from us and from our artists, the people we write with and travel with. You can hear us in them and you can hear the chemistry in our band because we live together as a band. I don't think a lot of bands and artists work as hard as we do on the creation, on the writing, the arrangements and the recording in our format."

Zac and Clay also give a lot of credit to Kings of Leon -- and Kings of Leon fans -- for inspiration. Zac Brown Band toured with the Nashville-based rockers in Europe last year and were blown away by audience feedback.

"That energy from that crowd was unlike anything I'd ever seen before ... People were going crazy," Zac recalls. "I was standing there and I wasn't crying, but tears were just rolling out of my face. It was moving to see what kind of music evokes that energy from those folks."

"It put a different light on our show. People looked at our show a little differently," Clay adds. "We were writing songs inspired by them, their music on stage and their fans' reaction to it. There are songs on this record that show us going in a different direction."

Zac Brown Band is going in a ton of different directions these days, as the band strengthens its brand. Their Southern Ground Records will next release a new project by Blackberry Smoke, followed by another Levi Lowrey album, both of which Clay predicts will perk country radio's ears. Southern Ground has opened its own recording studio just off Nashville's Music Row, and Zac plans to follow that with his own restaurant and bar in Music City. That's all on top of a headlining tour and ZBB's second annual Southern Ground Music and Food Festival, which will take place once again in Charleston, S.C., and this year also extends to Nashville. The event -- dubbed the "ultimate sensory experience" -- will include a diverse lineup of performers (to be announced soon), along with gourmet food prepared by award-winning chefs.

"As a fan, my dream would be to be right up there on stage with an act ... Someone would bring me a four-course meal with some really good wine and beer, and I'd be able to watch the show from right there," says Zac. "It's a full-sensory experience, not just the amazing bands and music. I have a chance to show our fans the level of hospitality that we want to give them, to show them we pay attention to those kind of details."

The festival's Nashville extension is just a little part of what Zac jokes is the band's "infiltration" of the city. But he and his Georgia-based bandmates still refuse to play the Nashville music industry's "game," so to speak, controlling every aspect of their music and refusing to produce anything other than what comes naturally. It's a formula that has certainly worked for the honored musicians, who now boast album sales of almost six million.

"We got lucky with 'Chicken Fried' (ZBB's 2005 breakthrough single) in making a connection with country radio," Clay explains when asked the secret of Zac Brown Band's success. "From then on, people gave us a chance. We didn't change anything about us. We didn't take other people's suggestions over what we should wear ... or to lose weight or lose the facial hair. [laughs] We don't have legs that look good in high heels, and we don't spend a lot of time on our hair. We've been genuine, and people have latched onto that."