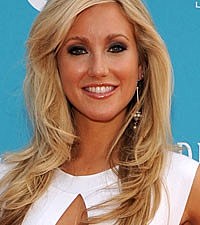 When country singer Whitney Duncan left for the South Pacific last May to compete on 'Survivor,' she told her fellow TV castaways she had a boyfriend back home. Friends and family, meanwhile, believed she was engaged to fellow musician Donny Fallgatter, the lead singer of Kingbilly.

Now, after rumors of a "secret marriage" hit the Internet, the truth has finally come out: Whitney and Donny were and still are husband and wife, but according to People, they won't be for much longer.

As the magazine reports, a circuit court judge heard divorce proceedings on Nov. 8 and granted the couple a divorce, but paperwork has not been finalized.

This comes a few weeks after the budding reality star and 'Skinny Dippin'' singer returned to the United States and revealed that she'd started a relationship with 'Survivor' costar Keith Tollefson. Whitney fessed up to the new romance in a phone call to Donny after 'Survivor' filming had wrapped, a source told People.

"[Donny] said she sounded weird, like something was up, and not like she was looking forward to seeing him," the friend recalled to the magazine.

Since August, Whitney has been spotted with Keith around Nashville, and she's tweeted about having a boyfriend. The divorce will be final once she and Donny return the signed forms to the Hickman County, N.D., judge who heard their case.

'Survivor: South Pacific' airs on Wednesday nights at 8:00 PM ET on CBS. Whitney is still in the running for the grand prize, while her new man was voted off in the Nov. 2 episode.