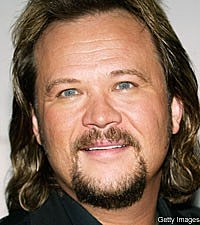 Travis Tritt is the latest to add his name to the ongoing list of artists forming their own independent record labels. The first release on the label, which is still in the beginning stages, will be a long-awaited album from Travis himself, his first since 2007's 'The Storm.'

"[The label] is strictly for me to release my music on," Travis tells Billboard. "We're not looking to sign other [artists]."

While the label does not have a name just yet, Travis says he's leaning toward calling it Post Oak Publishing. "[It's] in the process," he says. "[We're] working on putting together investors to be a part of it. We're getting very, very close to getting it off the ground."

As far as the creative end of the label, Travis plans to keep it to a minimum of who gets involved. "It's strictly going to be me," he states. "I feel like I've got enough experience over the years. I know what it takes to put a record together, so I'm not looking for people to come in and shape it."

Travis plans to start work on the new album soon, and he has been talking with James Otto and Lee Roy Parnell about collaborating on some songs for the project. "In the meantime, I've been writing on my own," he reports. "It's like Roger Miller used to say, 'Every now and then, like a dog having puppies, you have to crawl under the house and do it yourself.'"