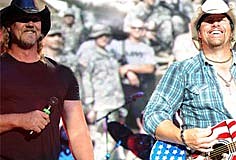 This Saturday (January 29) marks Toby Keith's return to the Grand Ole Opry stage, which he hasn't seen since his 2002 Opry debut. Labelmate and old friend Trace Adkins is also on the night's bill and is excited about the reunion.

"I'm looking forward to that," Trace tells The Boot. "It's been a while since I've been at the Ryman. Being there and with Toby coming in, it's going to be a lot of fun."

Adding some nice symmetry to the night, Trace also played on the night of Toby's Opry debut, a fact that we brought to his attention. "I didn't know that," Trace admits. "Did I really? I had no idea."

The Opry is at its winter home, Nashville's Ryman Auditorium, through the end of the month. "It's a special place," Trace says. "That's the thing I like: there's a spirit in the Ryman, it's almost palpable. I enjoy going there. A little dab will do you in the Ryman, though, then I like to go back to the big house."

By "the big house," Trace means the newly renovated Grand Ole Opry House, with its sprawling backstage area. While the Ryman has its charm, it can't compare to the Opry in certain areas. "There is no backstage at the Ryman," Trace explains. "It's really crowded when we do the Opry shows back there. There aren't very many dressing rooms. It's old school. You're on top of each other back there."

Toby and Trace do have a professional relationship -- Trace signed to Toby's Show Dog Universal record label last January -- but their personal relationship began long before that. "We go way, way back to the days before either one of us ever came to Nashville, and the connections that we have are pretty ironic to say the least," Toby told The Boot. "We were always playing some of the same bars. I'd play a club, he'd play a club. I'd see his picture up and mine would be hanging up, too. We didn't play much together because we were never at the same bars at the same time."

Trace hits the road right after the Opry show, headed to Pembroke Pines, Fla. for a show January 30. Get a full list of dates and cities here.