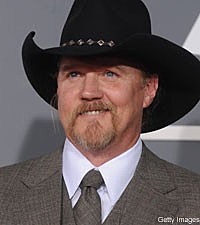 Trace Adkins may be one of country music's reigning superstars, but that doesn't mean he has always led a charmed life. With a personal history that includes 10 years on an oil rig, losing a finger in an accident, running over himself with a tractor while intoxicated, a DUI arrest and being shot in the heart by his now-ex-wife, Trace has had many moments that may cause the average person to look at the glass half empty. But for Trace, all those experiences are what make his life interesting.

"I've cheated death several times," Adkins tells the Washington Post. "There is no greater adrenaline rush than when you think there's a possibility you're about to die."

Not that he wants to repeat any of those experiences again. Now happily remarried and the father of five girls, Trace has an entirely different outlook on life. "I'm not really the party guy anymore," he says. "I play music! That's what I do for fun. I play golf now and then, and stand back and watch the kids grow up."

Trace may have encountered many obstacles in his own life, but he admits that he has been very fortunate in his career. "I don't have the story that I starved for years," he says. The Louisiana native moved to Nashville 17 years ago, because he says he knew he was "just as good a singer as most of the guys I was hearing on the radio. I didn't see any reason why I couldn't do it, too."

Five years after he moved, Trace met the man who at the time was the head of Capitol Records, Scott Hendricks, at baggage claim at the airport. Scott commented on Trace's deep speaking voice. Soon after that chance encounter, Trace was signed to the label, and the rest is history.

"I allowed myself to dream. but I didn't allow myself to hope, because I'm a realist," he says. "I knew what the odds were. I am one of those very fortunate people that my hobby turned into a career ... I'm still that country boy who grew up in the country environment. I just have a weird job."