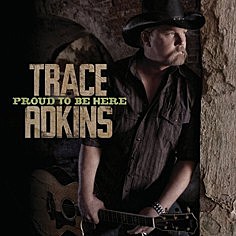 Considering the recent house fire that destroyed his family home and belongings, 'Proud to Be Here' is more than appropriate for the title of Trace Adkins' tenth studio album. The 10-song collection will be available on August 2, and features the Top 20 lead single, 'Just Fishin'.'

Although the singer did not pen the title track, Trace admits buddies Chris Wallin, Aaron Barker and Ira Dean wrote the biographical song with him in mind. "You know, I've had several near death experiences that everybody knows about," Trace explains, "and these guys know me very well, so they wrote the song for me."

The album's current single was another that hit close to home, despite being penned by Casey Beathard, Monty Criswell and Ed Hill. "'Just Fishin',' sounds like it's some redneck thing, but it's a song about a father going fishing with his little girl, and she thinks it's just fishin', but it's about much more than that," Trace told The Boot. "As a father of daughters, it hit all the right buttons. I've taught all my girls to fish, and it's about the lessons that you learn from teaching your children to fish. It's the time that you spend together doing it. That's what's really important."

The father of five showcased his youngest daughter, Trinity, in the video for the tune. "It was her turn; I've used all the other girls in videos," Trace told The Boot. "Mackenzie was in the 'More' video when she was two, and Brianna was in the 'Ladies Love Country Boys,' so it was Trinity's turn."

Trace will also release a deluxe edition of the album, featuring another collaboration with buddy Blake Shelton, 'If I Was a Woman.' In 2009, the two teamed up on 'Hillybilly Bone,' which went to No. 1 on the charts. The additional four-song deluxe package also includes the Trace co-penned song, 'Semper Fi.'

Fans can catch Trace out on the road in the months leading up to the album release. Click here to find tour dates and ticket availability.