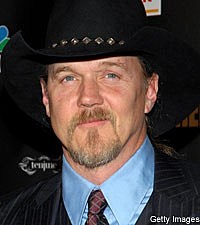 Trace Adkins heard those dreaded two words from Donald Trump last night: "You're fired." The country star lost out to British newspaper editor Piers Morgan on the season finale of 'Celebrity Apprentice.' The task at hand for the final two was to coordinate a huge charity event. Adkins was in charge of taking care of the event's performers, The Backstreet Boys, while Morgan was responsible for the auction and food. They were judged on money raised and ticket sales.

Though Trump fired Adkins, he had nothing but positive words to say about the country star, calling him a "special human being" and a "beautiful guy." Adkins has expressed mutual admiration for Trump, telling us in his AOL Music Sessions interview that the real estate mogul is an honest, no-nonsense guy, and assuring us that Trump's hair is definitely real.