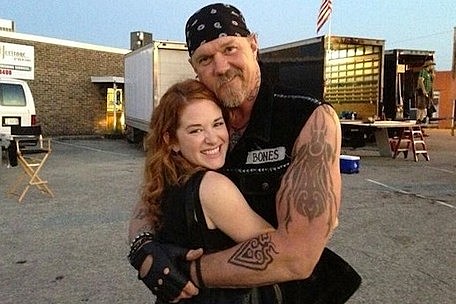 Trace Adkins recently released a new album, 'Love Will...,' but he's also no stranger to acting. He's appeared in 'The Lincoln Lawyer' with Matthew McConaughey, and he's also in the upcoming Western 'The Virginian.' Now he's going to act in another new movie that sounds like a light comedy departure from those more serious films.

According to Taste of Country, Adkins play a character named Bones in the upcoming 'Mom's Night Out,' which stars 'Grey's Anatomy' actress Sarah Drew, Patricia Heaton and Sean Astin. The film revolves around a stressed mother, played by Drew, whose husband (Astin) suggest she get away from it all on a relaxing night out with her friends. But when that night goes comically wrong, she somehow ends up trying to talk her way out of jail.

Adkins has apparently already filmed his part, as he responded, "Bye, sweetie!" to Drew after she tweeted, "I had such a blast working with you!!!" accompanied by the picture above.

In addition to his acting roles, Adkins will be spending quite a bit of time on the road promoting 'Love Will...' this summer, and he's releasing a Christmas album this winter. Keep up with his concert schedule and upcoming activities here.