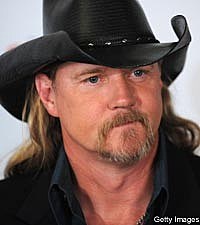 When Trace Adkins competed on NBC-TV's 'Celebrity Apprentice' last year, he marked the Food Allergy & Anaphylaxis Network as the charitable organization that would benefit from his potential win. He also appeared in two food allergy awareness posters which were designed to educate students in schools nationwide. Unfortunately, Trace came in second on the show, but he remains completely committed to the network's annual Walk For Food Allergy: Moving Toward A Cure.

Trace has signed on for the third year as the honorary chair of the event, which will include walks in 33 U.S. cities as well as an online drive later this year to help erase food allergies. Trace, whose youngest daughter, 7-year-old Brianna, suffers adverse symptoms from a number of different foods, says, "I know firsthand how important FAAN's efforts to increase funding for food allergy research and education are. Please join me and thousands of others nationwide in raising awareness about food allergies and money to find a cure."

The first walk is scheduled for August 15 in Portland, Ore., and the online drive takes place December 5. A full list of walk dates and cities is available at www.foodallergy.org.