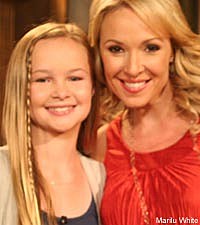 With five daughters to keep track of, Trace Adkins is one busy dad. But CMT is making the job of keeping tabs on one of them a little easier. Eleven-year-old Mackenzie Adkins is following in her dad's (rather large) footsteps by hitting the small screen this weekend. She's working as a 'CMT Insider' special correspondent, bringing host Katie Cook (pictured left with Mackenzie) a report about the new action-adventure comedy film, 'Shorts,' which opens in theaters on Aug. 21.

Mackenzie chats with the film's stars James Spader ('Boston Legal') and Jon Cryer ('Two and a Half Men'), and youngsters Jolie Vanier and Jimmy Bennett, following a private screening at Mann's Chinese Theatre in Hollywood.

Earlier this year, Mackenzie appeared as a Munchkin in a Nashville stage production of 'The Wizard of Oz.' Trace told The Boot at the time that because of their unique upbringing, his daughters have had opportunities he never could have imagined attheir age.