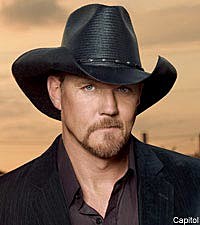 Two people were killed and five injured when a Ford F-250 truck crashed into a tour bus carrying Trace Adkins' band in Caddo Parish, Louisiana, Saturday morning, according to the Shreveport Times.

Trace, a native of Sarepta, La., was not on the bus, but already in Bossier City for a planned concert appearance. Authorities said the pickup had been swerving before it crossed the center line on U.S. 71 and hit the bus. Both men in the pickup truck were apparently killed on impact, and police were still investigating the crash as of Saturday afternoon.

Five of the nine people on the bus were taken to a local hospital in Vivian with minor injuries after the crash. Trace arrived at the scene in a van shortly after the crash and spent about 30 minutes with the uninjured band members, then proceeded to help them load their luggage into the vehicle. They left the scene together en route to the Vivian hospital to check on the others.

The singer is still scheduled to perform a concert with Martina McBride Saturday night in Bossier City. He decided to go on with the show, and is expected to perform a solo acoustic set.

"This is a real tragedy," Trace said in a statement. "Two people have been killed and I don't even know their names. So out of respect for their families, I prefer not to comment too much at this time."

Martina headed to her Twitter page to express her deep concern about the crash. "Just heard about Trace's band bus crash. Prayers to out to Trace, his band, driver and families of the drivers of the truck." Brad Paisley retweeted a report and replied "So sorry."