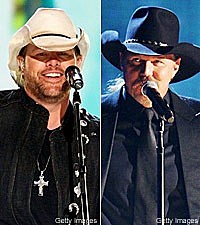 After a successful run with their America's Toughest tour in 2009, Toby Keith and Trace Adkins will hit the road together again this year. Their joint American Ride tour kicks off June 19 in Holmdel, N.J. Thirty-nine dates are already in the books for the trek, which is scheduled to run through late September. Toby's longtime tour sponsor, Ford F-Series, is also signing back on as the official sponsor.