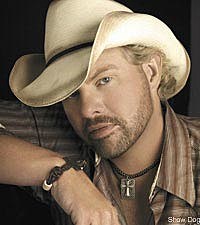 With nearly two decades behind him in his superstar country-music career, we wondered if Toby Keith could recall the most disappointing failure he's experienced and how he motivated himself to overcome the situation?

"[It was] probably disappointing myself with not having taking advantage of a college education," Toby confesses to The Boot. "I came out of school and had every opportunity in the world to get a higher education. But at the same time, I read a lot and I really worked hard at educating myself. I have a pretty good IQ. I hadn't really failed at life. I wouldn't trade places or change anything."

Still, Toby quickly acknowledges it hasn't all been smooth sailing. "There have been some tough times. When I came out of high school and worked in the oilfields with my dad, there were three or four years the oil boom was going on, and I was in on the ground floor of a world-wide oil field service company that you could make millions of dollars at it. Getting a jump on it at 18 and having a dad that had already [gone] up the ladder [helped]. He had worked his way up from a roughneck to mid-continent regional manager. I had the world set in front of me. I had all the private tech schools for that operation to go to, and three or four years in -- just as I'm getting through the boot camp part of it and learning the ropes -- the oil industry went away, and it would never come back like it was. That was devastating. All it does is make you appreciate when you do have it good. I went through it, and it makes me work harder."

Hard work which has certainly paid off for the Oklahoma native, who recently topped the both the album and singles charts with 'American Ride.'