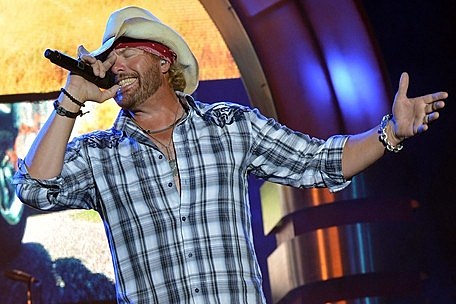 Three additional performers have been announced for Toby Keith's upcoming Oklahoma Twister Relief Concert -- and the names include one big surprise.

The wild card in the lineup is rocker Sammy Hagar. The longtime solo artist, former Van Halen and current Chickenfoot frontman has signed on to bring his raucous, high-energy showmanship to the beleaguered state.

"When Toby asked me to come on board, I immediately said 'Yes!'" Hagar says in a press release. "He's put together a hell of a concert lineup to help raise funds for the brave and resilient people of Oklahoma. My job is going to be to help them take their minds off their problems and have some much needed, good old-fashioned fun."

In addition, the event has brought Ford Trucks, Verizon, Walmart, and Academy of Country Music Lifting Lives aboard as sponsors. Sponsorship donations and underwriting of the concert will allow 100 percent of ticket proceeds to aid recovery efforts.

Tickets go on sale Friday, June 21 at 10am via Ticketmaster.com or by calling 1-800-745-3000, or visiting Homeland store locations. All seats are $25 (all taxes and fees included), all seats reserved, with an eight-ticket purchase limit.