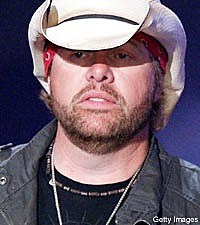 Toby Keith has a long history of making comments that strike a chord with Americans, but now he's created a stir among the people of Norway as well. His recent performance at the Nobel Peace Prize concert, honoring Nobel Peace Prize recipient President Barack Obama, was criticized by several members of the Norwegian Parliament, as well as a member of the event's committee.

Referring to his song, 'Courtesy of the Red, White and Blue (The Angry American),' one member of the Parliament, Karoline Knutsen, said, "If Keith really means what he says in his lyrics ... then this doesn't seem like a particularly good decision," according to MSNBC.

Toby defends both his song and the president. "If someone wants to say that one song out of 30 million albums sold and 27 No. 1's is inappropriate, then you can jump up and down about the one song."

He also responds to the recent announcement that more troops will be sent overseas, adding, "If President Obama has to send [more] troops into Afghanistan to fight evil, I'll pull for our guys to win, and I won't apologize for it. I'm an American, and I do pull for our team to fight evil."

Toby, who was invited to perform at last year's concert as well, received his own award earlier this year for his outstanding support of U.S. troops.