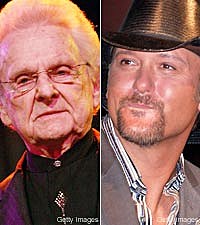 When Ralph's Stanley's autobiography, 'Man of Constant Sorrow: The Life and Times of a Music Legend,' comes out in October, don't look for the incendiary comments the Bluegrass Hall of Fame member made regarding Tim McGraw.

According to CMT, the publisher, Gotham Books, has confirmed that although they were included in author Eddie Dean's final edits of the volume, the passages regarding Tim have been deleted from the finished product. Ralph's criticism of Tim stemmed from the country hitmaker's alleged disrespectful behavior following the 82-year-old's 2002 Grammy win in a category which also included Tim as a nominee.

Additionally, Ralph's assertion that Tim "wouldn't know a real country song if it kicked him in the ass" will not appear in the book, which is due in stores October 15. What will be included are happier memories from his seven decades in the music business, ranging from his work with the Stanley Brothers to his involvement in the hugely successful film, 'O Brother, Where Art Thou?'