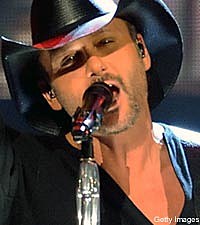 The annual CMA Music Festival begins in less than a week, with many of country music's biggest stars descending on Nashville at the same time -- and more than a few if them offering ample opportunity for some one-on-one time with loyal fans!

The Greased Lightning Fan Fair Hall will play host to dozens of artists who have already set aside time in their busy schedules to sign autographs. Tim McGraw, whose last appearance at the CMA Music Fest (formerly Fan Fair) was in 2000, will make an appearance, as well as the guys in Rascal Flatts, who have not made an appearance in an autograph booth at the festival since 2002. Other artists taking time to meet fans in the Greased Lightning Fan Fair Hall include Lady Antebellum, Jason Aldean, Love & Theft, Gloriana, Julianne Hough, Luke Bryan, Jake Owen, Mallary Hope and many more.

Trace Adkins, Alan Jackson, Ashton Shepherd, Dolly Parton, Brooks & Dunn and Bucky Covington are among the artists who host their own booths, with many of them making scheduled appearances at their individual booths throughout the festival. In addition, a special CMA Booth will host several big stars, including The Judds, Craig Morgan, Kellie Pickler, Randy Houser, Chuck Wicks, Darius Rucker plus others. And Taylor Swift recently announced she will spend an astonishing 13 hours meeting her adoring fans.

The big week starts off Monday, June 7, with the City of Hope celebrity softball game. For a rundown of official CMA Music Fest activities, click here.