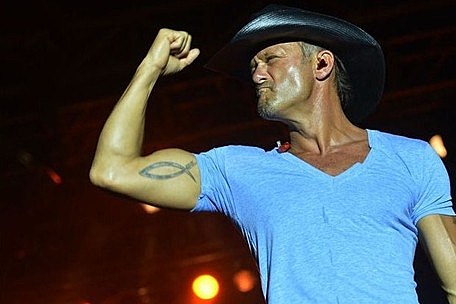 The hits just keep on coming for Tim McGraw.

The country superstar's current single, 'Highway Don't Care,' is at the top of both the Billboard and Mediabase charts this week. It is his 34th career No.1 single, and the second consecutive single from his current album to reach the top spot.

'Highway Don't Care' features a vocal turn by Taylor Swift and guitar solo from Keith Urban. "I thought this song had the potential to be really special the very first time I heard the demo," McGraw says in a press release. "And then standing on the stage with Taylor and Keith performing it live for the first time on the ACMs, I knew that it was really the kind of magical collaboration that only comes along every few years. The energy that night was undeniable...I know the three of us could feel it."

The song is a highlight of McGraw's current tour in support of 'Two Lanes of Freedom,' his first album under the auspices of a new record deal with Big Machine. It has sold more than a million digital downloads, and set a new record for single week audience impressions during the May 27-June 2 Nielsen tracking week.

"Radio continues to be supportive and excited about the music we're giving them, and I'm so thankful for my friends there and for all the fans who have really taken this thing to the next level," McGraw states. "It just keeps getting bigger and bigger in our show every night."