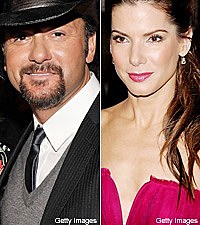 Tim McGraw begins work on a new film in Atlanta later this month. Co-starring Sandra Bullock, 'The Blind Side' dramatizes the true story of Michael Oher, an African-American teen from a troubled home, who is taken in by well-to-do couple Sean and Leigh Anne Touhy (played by McGraw and Bullock) and groomed for success as a college student and athlete.

According the Internet Movie Database, the film, based on a novel by Michael Lewis, will also star Oscar winner Kathy Bates. The real life of Michael Oher, who went on to play college football for the University of Mississippi, is expected to take center stage next month, when he will likely be a first round pick in the NFL Draft.

McGraw's previous film roles include 'Flicka,' 'The Kingdom,' 'Friday Night Lights' and 'Four Christmases.' No official release date has been announced for 'The Blind Side.'