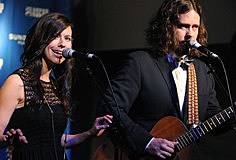 The Civil Wars singing partners Joy Williams and John Paul White have announced dates for their first headlining tour, which is set to kick off in Boulder, Colo. on August 4. The 35-date trek will criss-cross the U.S., as well as Europe and Canada for selected dates. The 'Barton Hollow' singers will take a brief hiatus from their headlining duties in September to provide opening act entertainment for British pop sensation Adele during her U.K. tour.

The duo first gained popularity with county music fans after Taylor Swift included their song, 'Poison and Wine,' in her iTunes Playlist, citing the acoustic ballad as her favorite duet. Their videos have been in rotation on CMT, and they were nominated for their first CMT Music Award for Duo Video of the Year for 'Barton Hollow.' The Civil Wars were recently nominated for two Americana Music Awards in the Duo/Group of the Year and Emerging Artist of the the Year categories, competing with Robert Plant, the Secret Sisters and the Avett Brothers.

September 4-25 various locations, UK - On tour in support of Adele