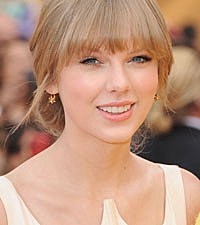 The nominees for the 14th annual Teen Choice Awards have been announced, and it seems that once again, country artists are appealing to fans of all ages, especially the younger crowd.

Taylor Swift leads the pack of country nominees with four nods. The 22-year-old is nominated in two all-genre categories: Choice Single by a Female Artist (for "Eyes Open" from the movie, "Hunger Games"), and Choice Female Artist, where she is competing against Adele, Jennifer Lopez, Katy Perry and Rihanna.

In addition, Taylor is nominated in two country categories. The songstress is nominated for Choice Female Country Artist, a category she shares with Lauren Alaina, Miranda Lambert, Kellie Pickler and Carrie Underwood. Her songwriting skills also earned her a nomination for Choice Country Song, for her self-penned hit, "Sparks Fly." Other songs in the category include Jason Aldean's "Tattoos on This Town," "Crazy Girl" by the Eli Young Band, "Storm Warning" by Hunter Hayes and Blake Shelton's "God Gave Me You."

Lady Antebellum is also named in two categories. The trio is vying for a win in Choice Music Group, along with Selena Gomez & The Scene, Gym Class Heroes, LMFAO and The Wanted. They are also in the running for Choice Country Group, which includes the Band Perry, the Eli Young Band, Rascal Flatts and Thompson Square.

The hit CW TV show, "Vampire Diaries," leads all nominees with six nods, while "American Idol" and Justin Bieber are close behind with five nods apiece. See a complete list of nominees here.