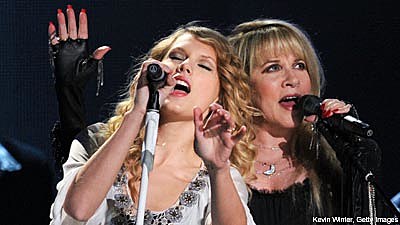 Fresh off her recent four-Grammy-win, Taylor Swift's name has been everywhere the last few days. Unfortunately for the young star, that may not be such a good thing.

Performing 'Rhiannon' and 'You Belong With Me' with rock legend Stevie Nicks during the Grammy ceremony, fans and critics alike wasted no time in sharing their opinions about Taylor's performance. In spite of taking home the trophy for Best Female Country Vocal Performance, the overwhelming consensus on this particular night was that the famous singer wasn't singing her best.

"Swift gave a strikingly bad vocal performance at Staples Center on Sunday," the LA Times wrote (quote via Nashville's Tennessean), "sounding tinny and rhythmically flat-footed as she shared the microphone with the distinctive Stevie Nicks."

The Washington Post agreed: "A night in the charmed life of Taylor Swift: Give an incredibly wretched vocal performance, go on to win the biggest Grammy of 2010 anyway."

Nashville's Tennessean also criticized the performance, offering that "Maybe a smidge of Jamie Foxx's autotune wouldn't be such a bad idea for this duet."

While most agree that her performance was not one of her best, the president and CEO of her label, Big Machine, is quick to defend her abilities.

"The facts say she is the undisputed best communicator that we've got," Scott Borchetta says. "So when she says something or feels something it affects more people than anybody else. Maybe she's not the best technical singer, but she is the best emotional singer. Everybody gets up there and is technically perfect people don't seem to want more of it. There's not an artist in any other format that people want more of than they want of Taylor. I think [the critics] are missing the whole voice of a generation that is happening right in front of them. Maybe they are jealous or can't understand that. But obviously the people that she talks to are engaged with her. No one is perfect on any given day. Maybe in that moment we didn't have the best night, but in the same breath, maybe we did."

Scott isn't the only one singing her praises. OK! magazine referred to it as a "fun, memorable performance," calling Taylor the "standout star of the evening." Butch Walker, who joined Taylor and Stevie on stage, says to Entertainment Weekly, "I think a lot of people give her unnecessary grief. Her appeal is not in [having] some big diva voice ... Taylor comes from country. It's a different approach to singing."

Whether or not she is the best singer, Taylor is the best-selling artist of the past year. Currently in Australia with her 'Fearless' tour, she will return to performing stateside March 4.