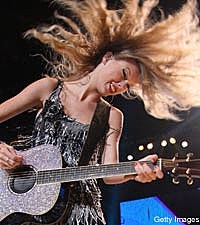 Taylor Swift, who's about the play the last four shows of her 2009 Fearless tour, has just announced that she plans to stay fearless on the road in 2010. Tickets for the superstar's Fearless 2010 tour will go on sale later this month, with prices starting at $25.

The titanic teen's 2010 trek kicks off Feb. 4 in Brisbane, Australia, with five shows scheduled Down Under before she begins her North American run on March 4 in Tampa, Fla. In all, Taylor will headline 37 shows in 29 cities in 22 states and provinces in the US and Canada.

"I'm so excited to take the Fearless tour back out on the road again in 2010!" says the 19-year-old, whose concerts this year have helped make her the youngest-ever CMA Entertainer of the Year nominee.

"This year's tour has been so much fun and even more unforgettable than I ever imagined. The fans have been so amazing, and I'm thrilled to play in new cities and see even more of my fans on the 2010 Fearless tour!"

Every show on Taylor's tour this year sold out in a matter of minutes, including one at Madison Square Garden that was a sell-out in just one minute, and a Los Angeles' STAPLES center show that sold out in two minutes. The tour was also the subject of an NBC special, 'Dateline: On Tour With Taylor Swift.'

Kellie Pickler will once again join Taylor as a featured artist on all of the North American dates, and Gloriana returns to open all of the shows.