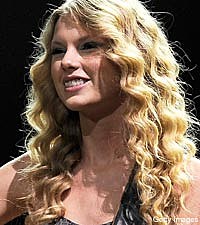 Before she released her debut album and became a global phenomenon, Taylor Swift, who was barely in her teens, was busily laying the foundation of her own publicity, blogging about -- and streaming -- songs she was writing for an ever-growing army of fans on MySpace.

Understandably, the demands of superstardom have left Taylor, who turns 20 on Sunday (Dec. 13), with a little less time to keep up with her famously lengthy blog entries, but the singer was finally able to sit down this past week, for the first time since September, to give fans a personal peek into Christmas through her eyes -- not only in her hometown, but in her own living room.

"I love winter," Taylor writes. "I'm laying on the couch, wearing fuzzy red and white socks. In my peripheral vision is a giant, lit up Christmas tree. This is my favorite time of year. Hands down."

Taylor adds that she had just returned to Nashville after being in Los Angeles for a week.

"Today I was out and about and in the studio all day, and when I drove home, I saw this strip of restaurants on Main Street in my hometown. I've driven that road and seen those restaurants four billion times since we moved here almost six years ago. Somehow they've never looked as perfect and welcoming as they did tonight. It was Sunday night and there were cars jammed into every last parking spot available. I could see the smoke billowing out of fireplace chimneys into cold winter air. It's the holidays. People are coming together and going out for dinner and something about seeing that just stuck with me. I love everything about this time of year, but mostly the way that people find ways to be with the ones they love. And I love sweaters. Everyone is wearing sweaters right now."

Taylor (who was spotted in the Big Apple with her new straight hair style this week) writes she's excited to be playing New York radio station Z100's Jingle Ball at Madison Square Garden on Friday (Dec. 11) and "probably spending some time just wandering around looking up at the sparkly store displays and stuff. And counting down to my birthday. I'm only a teenager for another week! I'm starting to practice saying 'Twenty' when people ask me how old I am. Weird. Cool? I guess it's inevitable, so .. Awesome!"

The grateful soon-to-be-ex-teen concludes by writing, "Thank you again for everything you guys have done to make all of these magical things happen to me. Please drive safely when you're out shopping. I hope you have an awesome holiday season. Again, I love you! lovelovelove."

No question Taylor will have much more to blog about -- if she can find the time -- in 2010! Fans can also follow her on her on her Twitter page.