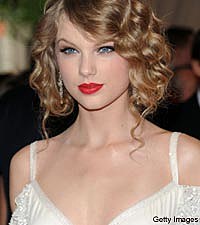 There was a lot of kissing and hugging going on in Taylor Swift's new video, which was shot in several different locations in Maine last week. Taylor and a handsome, blonde young man were the major players in the shoot, which takes place on the water, at a church, a private estate and at several other places around Kennebunk, Maine.

Apparently Taylor's video-boyfriend takes her out in a boat in Cape Porpoise, Maine and while out on the water asks her to marry him. According to oceanup.com, after the guy proposed to her he looked straight at the camera crew and said, "She said no!"

She must change her mind in the video, as the couple filmed a wedding scene at Christ Church in Kennebunk, complete with guests who blew bubbles as the bride and groom exited through the front doors of the church. For her video wedding, Taylor chose a cream colored strapless gown with a shirred bodice. She carried white flowers and wore her hair loosely up. Her groom was dressed in a black tuxedo and wore a white rose in his lapel.

The pastor of the church where the wedding scene was filmed said she was approached a few months ago about a country artist doing a video there, but she did not know who it was until the entourage arrived. Build in 1827, Christ Church boasts a large white steeple and a beautiful double-door entry, which is where the couple emerged after the wedding scene. A crowd of fans gathered as word of the video shoot spread, and before the scene was over there was a number of onlookers hanging around hoping to catch a glimpse of the 20-year old star.

Other fans were more fortunate, as Taylor was spotted at several restaurants throughout her stay in the Kennebunk area. She took time to pose for pictures and sign autographs.

The area where the video was shot is made up of the pristine seaside communities of Kennebunk, Kennebunkport, Arundel and Cape Porpoise, which are also known as the "Kennebunks." The backdrop is the ocean, while the villages are quaint with streets lined with one-of-a-kind shops and restaurants. Locals are often lobstermen and shopkeepers, each carrying on the timeless tradition of the New England fishing villages that sit back from beaches that stretch to the ocean. It is obviously a popular area for weddings, as one of the web pages for the communities has photos of a bride and groom with the ocean in the background, right beside photos of a shop-lined street and a local lighthouse.

Additional scenes for the video were filmed in Portland, Cape Elizabeth and Kennebunkport. Although the record label declined to give out the name of the song that the video shoot was for, speculation is that the tune may be her first release from a new album that the singer has been working on. Taylor's mother, Andrea, did tell one of the local newspapers in Maine that the video would be out in about six months.