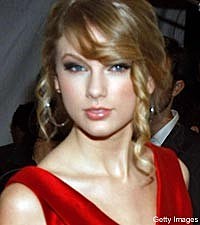 In the aftermath of her nightmarish VMA moment and Kanye West's subsequent apology, Taylor Swift is at least able to bask now in the love and support that fans and celebrities have been showering her with. At the same time, she's trying desperately to move on ... which some people just won't let her do.

"It's wonderful to have so much love and support sent in my direction," Taylor told Ryan Seacrest Friday on his radio show. "I got flowers from Janet Jackson!" she exclaimed.

And since Taylor has built her fairytale career writing songs about true life incidents and relationships, Ryan asked the 19-year-old phenom if she would write about the infamous VMA moment.

"I think that in order to write a song about something, I have to have clarity, and I have to be completely sure about what I feel about it," Taylor answered. "And, I'm not there yet."

"I'm just honestly trying not to make it into a bigger deal than it already is," came Taylor's weary response to the radio jock's request that she lay out the whole scene of that night. "It's become more of a big deal than I ever thought it would be. It happened on TV, so everybody saw what happened. I just would like to move on."

But the radio jock wouldn't take no for an answer and asked Taylor if she thought the whole thing was scripted. Sounding on the verge of tears, the singer tried again to shoot him down. "I didn't know what to think, but I think that we should maybe talk about something else. I've talked about this in one interview, and that was going to be it. It's not something I feel like we need to keep talking about."

Evidently, it was something the radio jock thought they needed to keep talking about, and he barged ahead, asking if she thought Kanye's apology was sincere. And once more, Taylor tried tried to change the subject -- gently but firmly. "I really would appreciate it if we could talk about something else, because I've asked you three times now, and I'm trying to be nice about it. It just isn't something we need to spend this whole interview talking about."

It was when the radio jock chastised Taylor that she was going to have to field these questions anyway in other interviews to come, and shot off yet another question about the night that Taylor's publicist finally picked up the line to request they move on. Because the radio jock didn't want to, Taylor did not return to the phone. Listen to the entire awkward interview here.