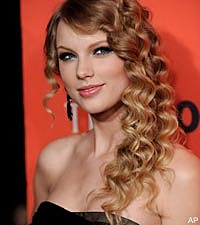 Taylor Swift may have just finished her 15-month, sold-out world tour, but the 20-year old says she has no plans of slowing down anytime soon.

"I'm actually going to be working on my record nonstop," she tells CMT. "For me, time off is working on a project and writing nonstop and spending all day and all night trying to get the exact perfect word in the second line of the bridge. For me, my life is a crossword puzzle at times. Like when I'm making an album, it's all about filling in the blanks and making it click. And when it finally does, it's so worth it."

Finally able to settle back into her hometown of Nashville, Taylor says life stays just as busy on and off the road. "It's weird to say that it feels like I've settled into sort of a normal routine where I'll play three or four shows a week, and the days that I'm not playing shows, I'm recording or sitting in my producer's basement, and we're tweaking little things about mixes and adding little instrument parts. It's a really fun way to live, and it's a fun way to spend the summer. I'm so excited about just throwing myself into making this album completely."

So what can fans expect from her third studio CD? "Boys and love!" Taylor tells MTV News, laughing about the obvious inspiration for her new music. "When I put out an album, I'd like to think that when people listen to that album, it's like a diary of what I've been through in the last two years. So it's a really fun way to express how I feel and what I'm going through."

Taylor will also spend her summer finishing renovations on her new Nashville condo, which includes a "people-sized birdcage."