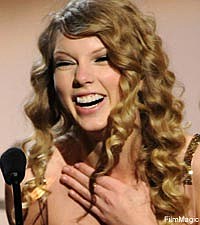 Taylor Swift flew to Alabama on Monday for a surprise visit to Auburn University, and in attendance were the two hug-starved college boys, Ryan Leander and Michael Wekall. The country superstar posted a photo of herself on Twitter, wearing a T-shirt that said "A Hug for Ryan Leander and Michael," and revealed, "So, we might have flown to Alabama for a surprise show today. One of those unforgettable days. Thank you, Auburn!"

Taylor's impromptu trip was the ultimate reward for a mission the two Auburn students were on. They performed three elaborate challenges in order to get the chance to lovingly wrap their arms around the blonde beauty.

Last week, Taylor posted a video responding to the completion of Challenge No. 2 in the boys quest, asking them to be near a computer to check their email around 12:30 PM Central time on Monday (April 26) for Challenge No. 3. The guys were, and they helped to set up the surprise performance by Taylor at the Auburn Hotel and Conference Center, by posting on their website a call for everyone to go to the conference center Monday afternoon to sing karaoke. Numerous folks came and did, according to a video from Taylor, the "largest karaoke" version of her hit 'You Belong With Me.' And she said that she wished she could have been there. Well, she was there hiding ... and she walked out on a stage to the screams of the crowd. Cell phone service was said to have shut down for a while, because the students were furiously calling, texting and tweeting each other about the surprise performance. Taylor and her band performed a few numbers acoustically, including 'Love Story,' much to the delight of the excited students.

And most importantly, Ryan and Michael finally received their hugs from the superstar!