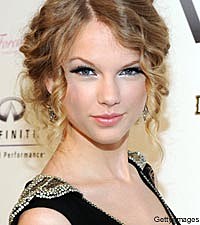 Taylor Swift will be performing double-duty at the upcoming 'Hope For Haiti' benefit to help provide financial relief for the country devastated by an earthquake last week. Already signed on to sing during the two-hour live broadcast, Taylor also volunteered to answer phone calls from viewers wishing to pledge money to the worthwhile cause.

"I've never actually worked a phone bank before," Taylor tells Nashville's Tennessean newspaper. "But I want to do everything I can to help out this horrible situation. I'm passionate about this. This one was an immediate yes."

Getting ready to kick off the next leg of her worldwide 'Fearless' tour, Taylor just released her new single, 'Today Was a Fairytale,' from her upcoming major film debut in 'Valentine's Day.' Reaching nearly 100,000 downloads on the first day, the single skyrocketed her sales to more than 25 million, solidifying her reign as the top-selling digital artist in the world.

"I freaked out when I saw that it was No.1 on iTunes," she says. "I'm always blown away by what the fans have the ability to do for me." Nominated for eight Grammy awards on Jan. 31, the singer will debut 'Today Was a Fairytale' during her performance at the live televised broadcast. The next leg of her tour kicks off on Feb. 4, with opening acts Kellie Pickler and Gloriana.

Download Taylor Swift Songs
How You Can Help Haiti
Filed Under: Taylor Swift
Categories: Country News
Comments
Leave A Comment
Back To Top