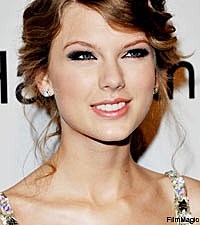 In just a few short years, Taylor Swift has built a resume that includes a record-breaking, sold-out, worldwide tour, her first major film role, the top-selling album of any any genre in 2009, plus numerous awards and accolades -- including her four Grammy wins this past week. It's a lot for anyone to take in ... even the young superstar herself.

Reflecting on a recent shopping trip with her brother, Taylor tells Nashville's Tennessean newspaper that she had a moment when she realized her own life seemed surreal. "We were in the car, and Austin looked at me and said, 'Can you believe this actually happened?'"

Sometimes, she can't. "When I was home in early January, I was able to look around and think about all the things I used to think. All the things I used to wish I'd get to do. The idea that people might talk about me going to the grocery store, like they talked about Martina McBride, is a beautiful thing to me. When I get asked to sign autographs in the cereal aisle, I love it."

Recently moving out of her parent's home and into a place all her own, the singer says Mom and Dad still deserve much of the credit for her success. "I have a logical, practical, realistic mother, and a head-in-the clouds, friendly, optimistic father. And so I'm a dreamer, and my imagination goes to places where love lasts forever and everything is covered in glitter, and that's from my dad's personality. Every time I walk off stage, he tells me how much he loved it, or how he was standing at the soundboard, crying. But my mom, she'll tell me exactly what she saw. If she saw something that could have been better, she's not going to hold it in. She's not going to sugarcoat."

Taylor's meteoric rise to stardom brings back memories for fellow Grammy-award winner Janis Ian, who wrote her first hit single, 'Society's Child,' at the age of 13. She says Taylor is a stand-out among other teen stars. "Most of them at that age are product development , but Taylor writes her own stuff," Janis explains. "She writes well-crafted songs, and she writes what she knows, which is not as easy as it sounds ... I wish I'd had her grace when I was her age. It's nice for me to see somebody in her position who is talented, and not a jerk."

Taylor's last few years may have been full of life experiences most people only dream of, but she insists she takes none of it for granted. "I've gotten to take what has happened to me and process it to my full capability," she writes on her blog, "and celebrate it the way it deserved to be celebrated."

Currently in Australia on her Fearless tour, Taylor's sold-out trek returns to the States March 4 in Tampa, Fla.